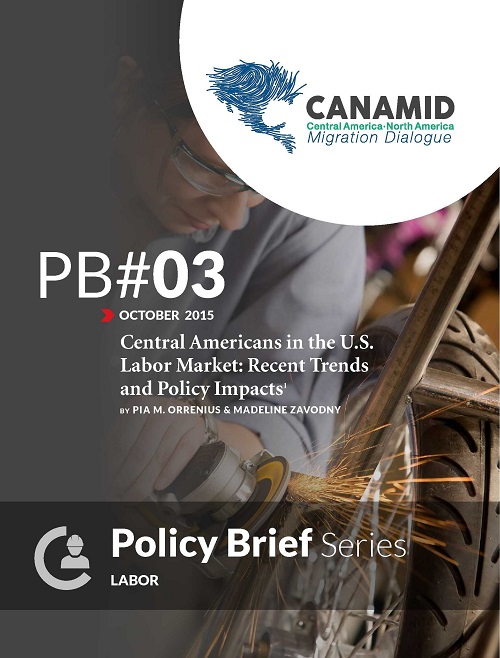 Immigration from Central America to the United States is rising rapidly. Much of this inflow is unauthorized. Violence and corruption in Central America is affecting both the volume and composition of current migrants who are less educated, less likely to speak English, and who face tougher border and interior enforcement than Central Americans who immigrated in the 1980s and 1990s faced. The increasing vulnerability of the new Central American migrants and the United States’ hardening policy environment is leading to worse labor market outcomes among recent migrants compared with both their co-nationals in the past and other recent arrivals, such as Mexicans. The increase in state-level E-Verify mandates is one example of policies that have adversely impacted Central American migrants. As we show, these mandates have led to lower employment and labor force participation rates among migrants living in states where such mandates have been implemented. In contrast to punitive policies at the state level, President Obama announced in late 2014 a measure known as Deferred Action for Parents of Americans (DAPA), which intended to grant temporary legal status and work permits to a large group of unauthorized immigrants. We argue that this measure is similar to the existing provision of Temporary Protected Status (TPS), extended to immigrants from countries in turmoil, and we use the Salvadoran experience with TPS in 2001 to demonstrate how it improves labor market opportunities for eligible immigrants—raising wages for men and increasing labor force participation for women. We conclude with a number of policy recommendations aimed at expanding legal avenues to accommodate immigrant flows from Central America while regularizing those already in the U.S.